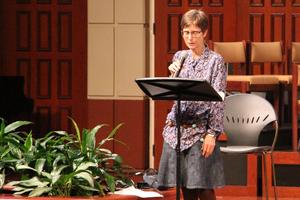 by Shawn Hassen
We are so grateful to have had so many of our Warrior family join us for the Annual Address.  The following are the closing remarks made by SRCS English instructor and instructional specialist, Shawn Hassen.
In 1915, New England poet Robert Frost wrote,

And sorry I could not travel both

And be one traveler, long I stood

And looked down one as far as I could

To where it bent in the undergrowth . . .

After looking down one of the paths, the speaker of the poem then chooses the other one, for it was, he claims,

And having perhaps the better claim,

Because it was grassy and wanted wear . . .

With these lines from "The Road Not Taken," Frost establishes the age-old metaphor of paths-- not just literal paths through an autumn woods, but metaphoric paths in life.  And the surprising decision of his speaker to take the path opposite the one he first studied demonstrates a common dilemma with paths:  we don't always know how to choose them.
Robert Frost's speaker only has to choose between two roads.  Today, however, in a post-modern, post-Christian world where moral absolutes are being replaced with moral relativism--where truth has been declared unknowable or non-existent--our children are being offered many, many roads to choose from.  There is the road of personal pleasure where fun and entertainment are replacing motivation, perseverance, and intellectual curiosity.  There is the path of fluid identity where feelings and emotions rule the day.  Once upon a time, children chose whether they wanted a cheeseburger or chicken nuggets.  Now they can choose whether they want to be male or female.  There is the path of relativism and tolerance, where truth doesn't exist, right and wrong vary from person to person and circumstance to circumstance, and debate must be silenced.  There is the road of self promotion and self invention.  The smart phones in our back pockets allow children to invent themselves--and reinvent themselves--and reinvent themselves again--to earn the thumbs and likes that will comfort their desperately insecure hearts until the next trend dumps them again.
And at a formative time in life, when they are learning how to view reality, truth, the universe, and their place and value in it, high schools and universities will convincingly place them on the paths of naturalism, Marxism, existentialism, and atheism which will answer those questions for them: that they are evolutionary products and victims of random chance with no worth other than what they can manage to create for themselves.
There aren't two paths to choose from.  There are many, all leading to emptiness and destruction.
Will we flip a coin? Or will we seek a different path?
At Seven Rivers Christian School, Headmaster Dana James speaks of Christian education as putting children on the right path.  In a world of shifting sand, Jesus Christ--not Karl Marx, not Sigmund Freud, not Charles Darwin--is the bedrock of truth.  Jesus Christ is Lord of scientific inquiry, and He is Lord of ethics in technology.  He is Lord of the unfolding events in history, He is Lord of the beauty in arts and literature, and He is Lord of the very mathematical equations that knit together His wondrously created universe.  He is Lord of the path where students will learn from tremendously qualified faculty, teachers who love their subjects and who long to introduce their students to this Jesus Christ, this solid bedrock of truth and joy in a culture of shifting sand and false promises.
Robert Frost penned "The Road Not Taken," in part, to rib his notoriously indecisive friend.  But his intentional ambiguity points to truths in the poem that are undeniable and anything but funny.  The speaker concludes that the path he chose "has made all the difference."  The path matters.   Even though God determines every individual child's unique footsteps--be they stubborn and wandering, or bold and unwavering-- the path that parents set them on matters.
Jesus Christ is Lord of the path.  As a faculty here at Seven Rivers Christian School, we pray for your children and grandchildren, we pray for your friends' children and grandchildren, and we pray that God would allow us to be their teachers and guides along the path that leads to flourishing, love, freedom, and life.