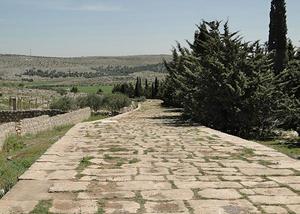 by Spencer White
My name is Spencer White, and I have a passion for history. This is something that many people find shockingly boring about me. How can someone find passion in a collection of random facts and tedious dates?  I would love the opportunity to explain. Outside of school policy reminders, dress code announcements, and handing out syllabi, one of the first things I do in my history classes is set myself to the task of explaining the importance of history. The importance of history is lost on many students seeking to check off a transcript requirement, and outside of the usual “Those who don't know history are destined to repeat it," few people actually consider the other merits of sitting through a 90-minute history lecture -- that is until I explain something known as “redemptive history.” This is the concept that we, as Christians, can look at history as a story of God’s plan in creation. We can see the magnificently detailed way in which God has worked everything to come together for His glory. This is something our founding fathers referred to as “Providence,” and I would like to give you an example of God’s providence working in a way random chance would never work.
When people today think of the Roman Empire, it is easy to imagine the violence of their armies as they marched across the known world conquering all with their well-organized legions. However, in the early days of the empire, Rome enjoyed a period of time referred to as the “Pax Romana,” translated from Latin as “Roman Peace.” This roughly 200-year time span that began with the reign of Caesar Augustus is commonly known as the Golden Age of Rome. Because of the relative tranquility, Rome was able to devote all of their vast resources to organizing their empire (which  included most of the known world). While massive building projects ensued, it was one of the most basic improvements that made the providential difference.
I am talking about the construction of the Roman roadways, which spanned the expanse of Europe, North Africa, and Asia Minor, and eventually led back to Rome itself. These highways were designed to allow legionaries to rapidly march to troubled areas of the Empire (and keep them well supplied when they did). A second use was for pedestrians and merchants to travel and trade. Outside of practical use, these roads become important in redemptive history when we consider the Pax Romana coincided with the founding of Christianity. Jesus was born during the reign of Augustus (it was Augustus who unknowingly fulfilled prophecy by requiring Joseph to return to Bethlehem for a census); his disciples, dispersed due to persecution, spread the Gospel using this road system.
When the church began in AD 30 (Pentecost), there were 3,000 people converted.  Only seventy years later in AD 100, it is estimated there were 25,000 Christians, and by AD 350 there were thirty million Christians worldwide. While it is insane to see that kind of growth from a peaceful religion during a time of no mass media, it is certain the infrastructure of Rome allowed for this, as can be seen by Paul using these roads on all three of his missionary journeys. The boldness of the disciples is the number one reason for these incredible numbers, yet God definitely used the roads built during the Pax Romana to spread the good news all over the world.
The Romans were notorious for their organizational abilities, and their Empire worked like a well-oiled machine. Should we as Christians be surprised that God allowed such an efficient people to be in charge of the whole world during the very foundations of Christianity? Rome unknowingly built an ancient interstate system that served the Great Commission mandate from Matthew 28. If history is viewed through the lens of God’s providence, Christians should see that He is not stagnant in using people or empires for his purpose. God knew what he was doing in the Pax Romana, and God knows what he’s doing today.